Glimpse 3.2.0 is the last release prior to Glimpse 4.0.0, which will add Java 11 support, including some breaking changes to APIs and resource locations.

Glimpse 3.2.0 is provided as a release for those unable to immediately switch to Glimpse 4.0.0.

The new Glimpse Wizard module provides a Swing-based interview-style dialog for guiding a user through a sequence of screens.

Glimpse 3.0.0 updates Glimpse to OpenGL 3.0, removing all usage of deprecated OpenGL 2.0 fixed function pipeline features. This allows Glimpse to use OpenGL Core profiles for version 3 and above.

These changes allow all parts of Glimpse to render correctly on platforms which do not support Compatibility profiles (such as MacOS).

Note that this update represents significant changes made to most parts of the Glimpse API, in addition to changing some portions of the public API.

Glimpse 2.5.0 improves on the Digital Nautical Chart (DNC) rendering capability added in Glimpse 2.4.0. There is a tutorial available on the Glimpse GitHub Wiki describing how to download and display DNC charts in Glimpse.

The new extras-dnc module provides capabilities for pre-processing DNC databases into an optimized format which Glimpse can use to dynamically load, reproject, and render the data interactively and in real time. Glimpse also provides the capability to interactively query DNC map features for their associated metadata.

Glimpse 2.3.0 provides bug fixes as well as a number of new features:

Glimpse 2.2.0 provides incremental bug fixes and feature enhancements as well as a number of new features:

Check it out right away with a live demo. The source is available on GitHub under the same BSD 3-clause license as Glimpse. 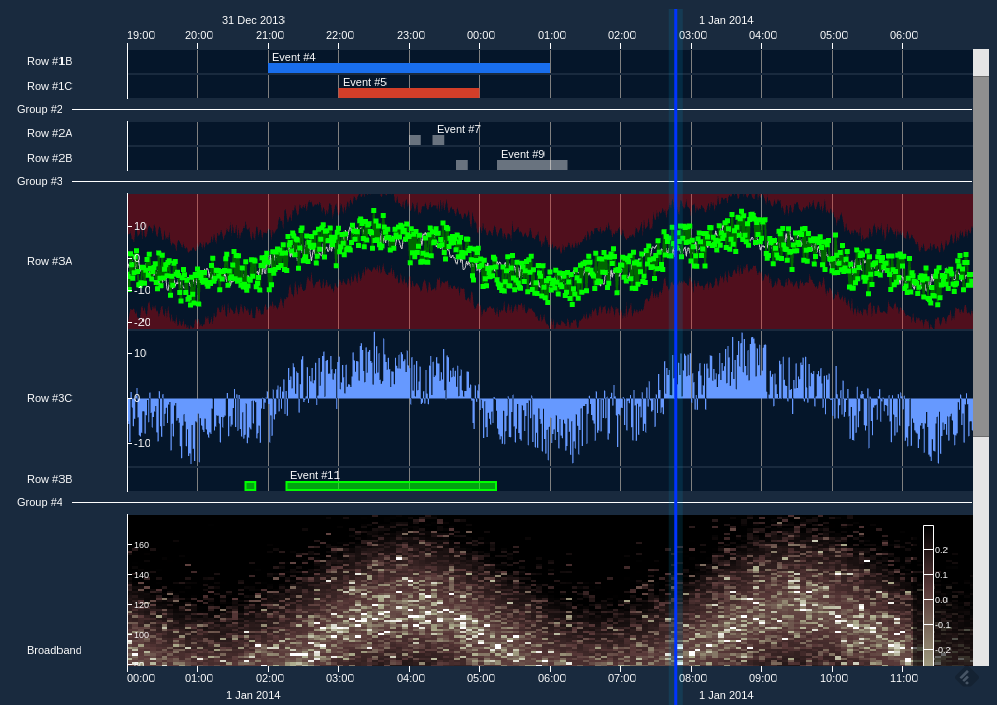 Glimpse 2.1.3 provides bug fixes for synchronization issues with some GlimpsePainters and dispose issues with GlimpseCanvas.

The NASA Worldwind dependency of the extras-worldwind module is updated to Worldwind 2.0.0.

Glimpse 2.1.2 updates Glimpse to JOGL 2.1.5. This update fixes resize issues with NewtSwingGlimpseCanvas in Mac OS X. The GLProfile which Glimpse requests by default has also been changed to be more compatible with OS X (which does not provide a GL3 profile which is backwards compatible with GL2).

Glimpse 2.1.2 also fixes a number of build issues introduced when modifying the project to deploy to Maven Central. The Glimpse Maven build should work correctly now and require only artifacts from Maven Central (referencing the Glimpse Maven repository in your pom is no longer necessary).

Glimpse is now available in the Maven Central Repository!

Changes include fixes to threading issues caused by NEWT's threading model, timeline enhancements, and continued work on bugs introduced by the move to Jogl 2.

Note: Glimpse 2 is still quite new and some of the API and feature changes from Glimpse 1 are still being worked out. As a result, upgrading to 2.0.2 from 2.0.0 may require some minor refactoring. Please post in the Glimpse Forum for help.

Glimpse 2.0.1 provides minor bug fixes for issues caused by the move to JOGL 2.0 and by the refactoring performed as part of the Glimpse 2.0 release. It also provides a number of StackedTimePlot2D API improvements.

Note, Glimpse 2 is still quite new, and some of the API and feature changes from Glimpse 1 are still being worked out. As a result, upgrading to 2.0.1 from 2.0.0 may require some minor refactoring. Please post in the Glimpse Forum for help.