The easiest way to get familiar with what Glimpse offers and how it works is to check out the large library of examples in the core-examples and extras-examples modules. Each example consists of a single runnable Java class that demonstrates a feature of Glimpse. Here's the output of HeatMapExample.java: 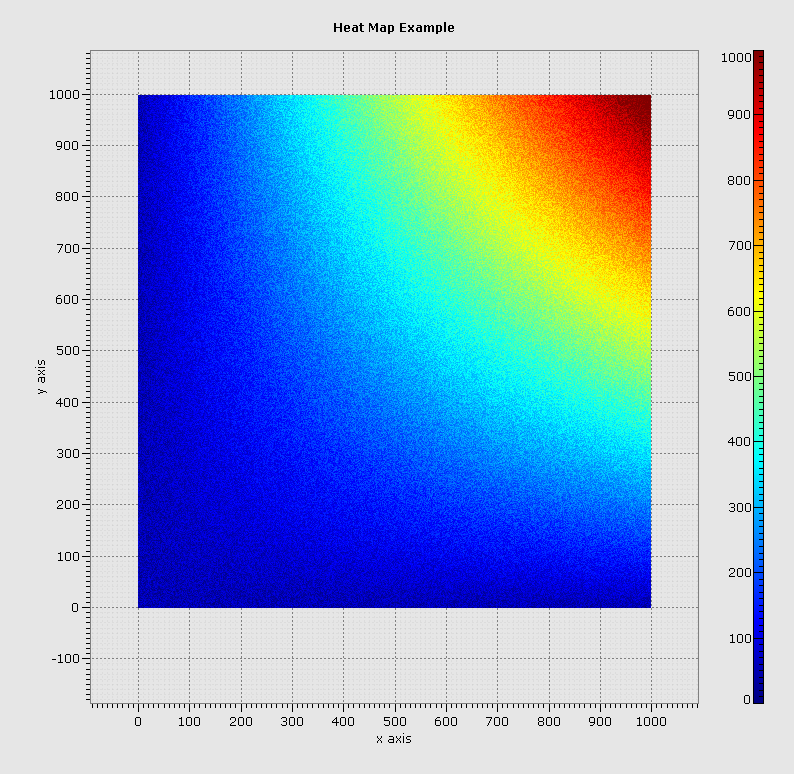 The following code snippit is all that is necessary to create a Swing JFrame containing a GlimpseCanvas:

When this snippet is run, a window with a 100 pixel by 100 pixel black square will appear on the screen. In order to get something more interesting showing up, we need to add GlimpseLayouts and GlimpsePainters to the canvas.

Glimpse provides tools to break up a single GlimpseCanvas into many (possibly nested) logical plotting areas which can each be painted on and receive mouse events. Each plotting area is defined by a GlimpseLayout (source) and arranged using Mig Layout constraints just like you might use to layout Swing Components. The screenshot below outlines the GlimpseLayouts from HeatMapExample. Although everything is rendered in a single OpenGL canvas, Glimpse allows mouse listeners to be attached to any GlimpseLayout and allows rendering to a specific GlimpseLayout. 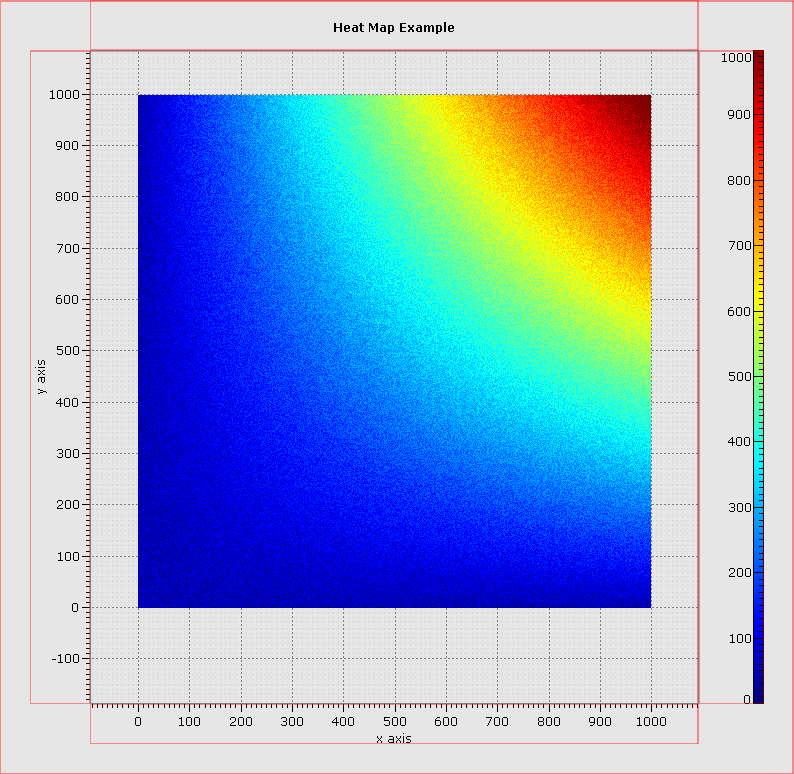 Even better, GlimpseLayouts can be nested, allowing easy construction of very complicated plots. For example, three simple heat map plots could be nested into a single hybrid plot. In the image below the GlimpseLayouts are again outlined in red. The example class SimpleLayoutExample.java demonstrates how Mig Layout is used to achieve this arrangement. 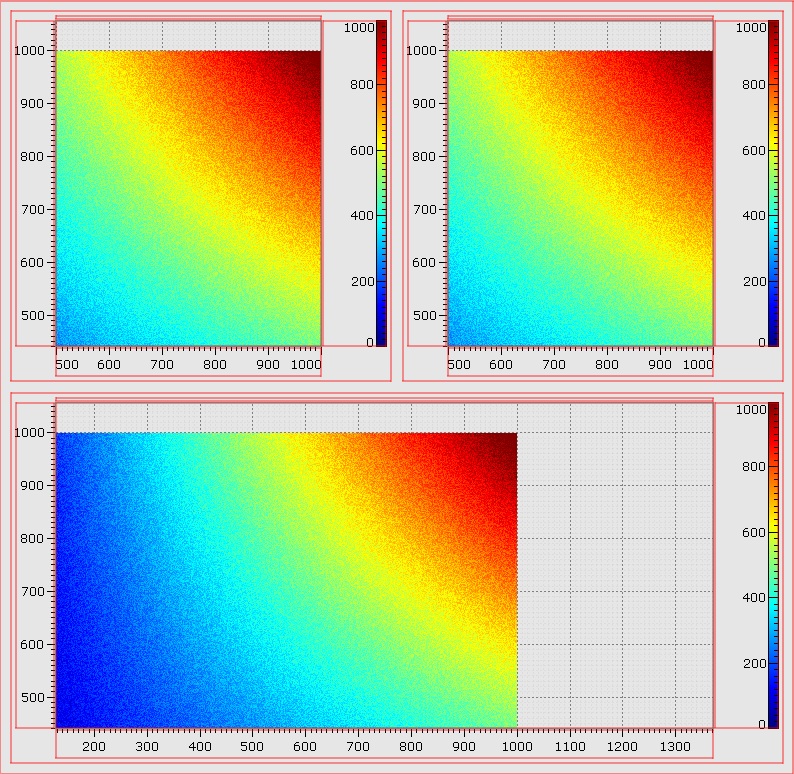 Once the plotting areas have been defined via GlimpseLayouts, OpenGL rendering inside GlimpseLayouts is performed by GlimpsePainters. Multiple GlimpsePainters can be added to a GlimpseLayout and act like layers. Glimpse provides lots of pre-built painters in the com.metsci.glimpse.painter package. However, most applications also want to perform custom rendering. The com.metsci.glimpse.painter.base package contains the GlimpsePainter interface, as well as a number of abstract helper implementations. In most cases, GlimpseDataPainter2D is a good place to start. It handles setting up the OpenGL viewport and scissor regions and projection matrix so that glVertex( ) calls will draw to the correct screen location based on the GlimpseLayout being painted into and the bounds of the data axes.

The following example demonstrates a very simple GlimpsePainter which draws a blue diagonal line from (5.0,5.0) to (10.0,10.0) in data coordinates. In the screenshot, a NumericXYAxisPainter (another GlimpsePainter) has also been added to the same GlimpseLayout to draw axis tick marks and labels. 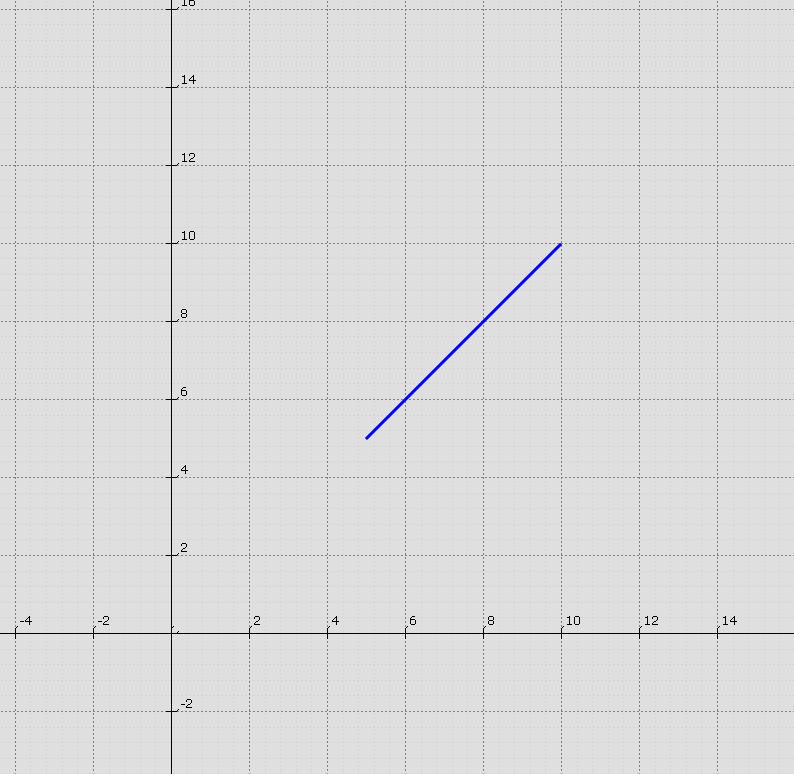 Axis1D and Axis2D are used in conjunction with GlimpseLayouts and GlimpsePainters to determine where data is drawn. GlimpseAxisLayout2D is a GlimpseLayout subclass which has an associated Axis2D. Glimpse mouse listeners can use this axis to report the click position in axis coordinates instead of pixel coordinates, as in the following example: The SimplePainter class which we wrote above extended GlimpseDataPainter2D. When added to a GlimpseAxisLayout2D, this GlimpsePainter subclass automatically sets up the OpenGL projection matrix to draw vertices at the correct position in axis coordinates. GlimpseDataPainter2D also provides the Axis2D as an argument to the paintTo() method.

Although you can start with a GlimpseCanvas and construct visualizations by arranging GlimpseLayouts and adding GlimpsePainters and GlimpseMouseListeners, it is often easier to start with one of the pre-built plots in the com.metsci.glimpse.plot package. SimplePlot2D provides a basic plotting area with x, y, and z axes, a title, and grid lines.

SimplePlot2D also provides a number of methods for modifying the appearace of the plot, the size of the area allocated to the axes, the title of the plot, etc... If more axes are needed, MultiAxisPlot2D allows any number of axes on the top, bottom, left, or right of the plot. See MultiAxisPlotExample for a usage example. Glimpse also provides a number of specialized plots for dealing with temporal information. CollapsibleTimePlot2D provides a timeline and the ability to easily visualize events (with start and end times and customizable labels, icons, and colors), timeseries, and other temporal data.